Home Page What is the Green Envy? 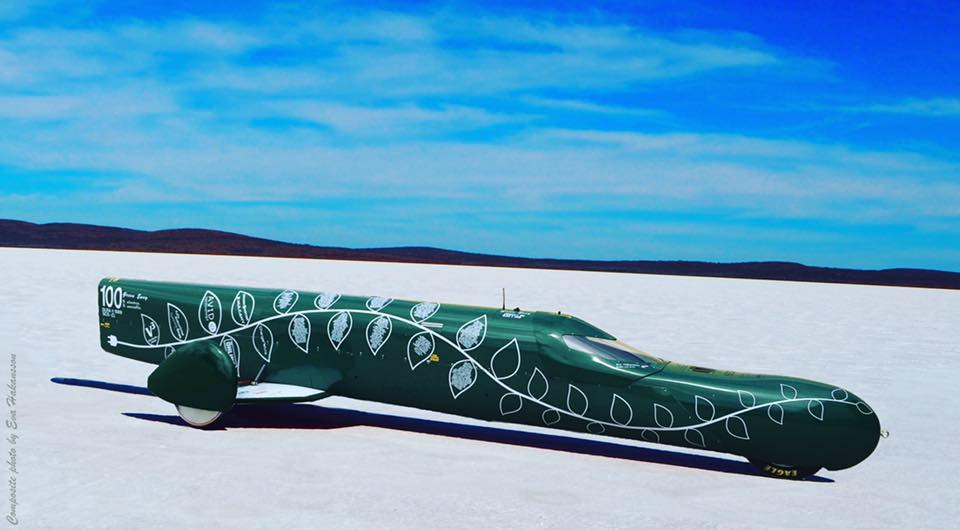 “Green Envy” is an electric streamliner motorcycle, and it is being built to become the world’s fastest motorcycle. Full stop! Green Envy is the successor of the KillaJoule, which until very recently was the world’s fastest electric motorcycle at 270mph (434 km/h). Just like the KillaJoule, Green Envy it is being built by me (Eva Hakansson), my husband Bill Dubé, and a team of awesome volunteers. Bill and I are both mechanical engineers; I have a PhD in mechanical engineering, while Bill has a bachelor degree in mechanical engineering and a PhD in Applied Physics. We love to build things that have never been built before! You can read the whole story about me, including how I met Bill here.

Green Envy is a battery-powered, streamliner, sidecar motorcycle and it looks very much like the KillaJoule. However, there are some major differences. First off, Green Envy is – of course – green instead of red. It also has more than twice the power, almost 1000 horsepower. It is being built with the goal to be the world’s fastest motorcycle. Full stop.* In order to fit the larger drivetrain, the Green Envy is about 5 ft (1.5 m ) longer than the KillaJoule, which means about 23 ft or 7 m. The cross-sectional area is a tiny bit bigger, and the aerodynamics are improved and will be improved further. There are also be a lot of subtle changes improving performance, handling, and reliability. Or simply speaking, we learned from all the mistakes we made building the KillaJoule. 😉

The Green Envy has been constructed in New Zealand and was ready for race in February 2020. It was shipped to Australia to be raced at the Lake Gairdner salt flats in Australia in March 2020. Then the big virus outbreak hit…. Its debut was rescheduled for March 2021 in Australia. Then COVID stops us again, this time by closing the border between New Zealand and Australia. In 2022, we thought it would all come together – then the Lake Gairdner was flooded and the access roads damaged, and the event was cancelled. Third time was clearly not the charm. We are looking to go to Bonneville instead, and if that doesn’t work, we will be back in Australia for 2023.

The Green Envy was built in record speed. On July 30, 2019 the high strength steel tubes for the frame were laser cut by Mulcahy Engineering in Auckland, New Zealand. 6 months and 22 days later we loaded it in a container and sent it to Australia. Such a fast build is almost unheard of; it typically takes several years before a scratch built vehicle like this is on its wheels. However, there is still room for much improvement, and we will within a couple of years be looking to replace the battery pack (it was transferred over fro the KillaJoule). If you are a perspective sponsor, contact me for more info to get your component into this piece of history! There are also other ways of getting your name into the history books: click here to get your name on the Green Envy!

We are changing color – from red to green! After 9years on the race track, the KillaJoule is now retired! It is simply too slow and too old. Its successor the “Green Envy” was built in 2019 and was ready for debut in 2020, which has been delayed for obvious reasons…. We are hoping for better luck in 2022.

Battery chemistry: Lithium-ion-iron-nano-phosphate by A123 Systems.

Wheels: “KiWheel” non-pnematic wheels. You can read more about them here. Goodyear pneumatic LSR tires as Plan B and for initial testing.

Weight:  1200 kg (2500 lbs) [Close to twice the weight of the KillaJoule due to the larger drivetrain, larger frame, and more safety features]

Learn more about the innards of the Green Envy on the backside of our postcard: 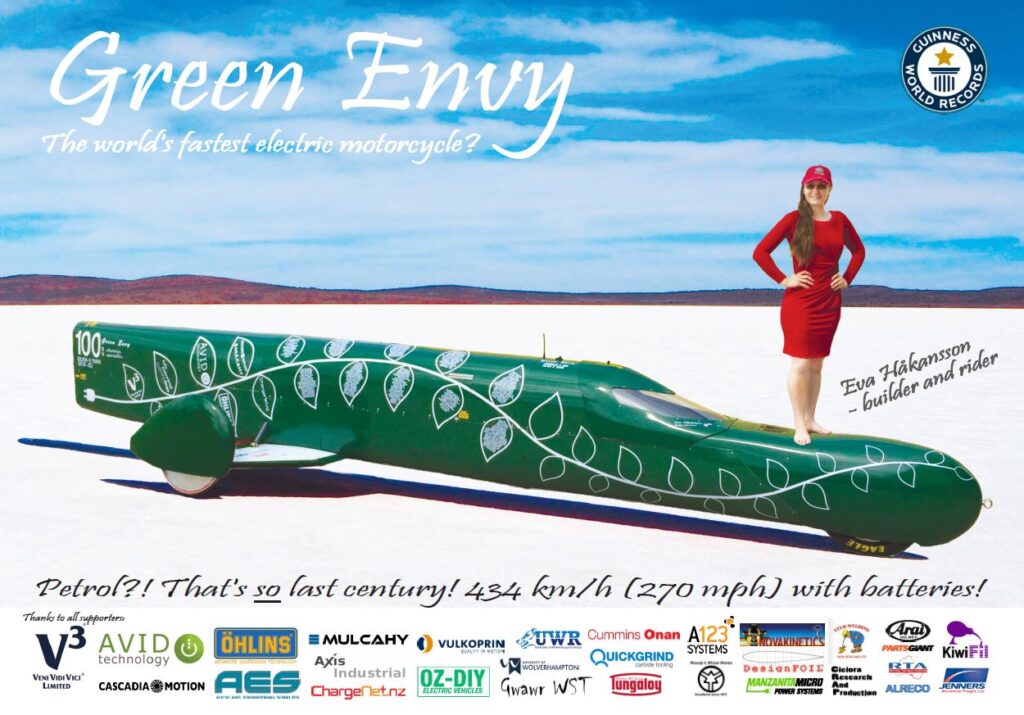 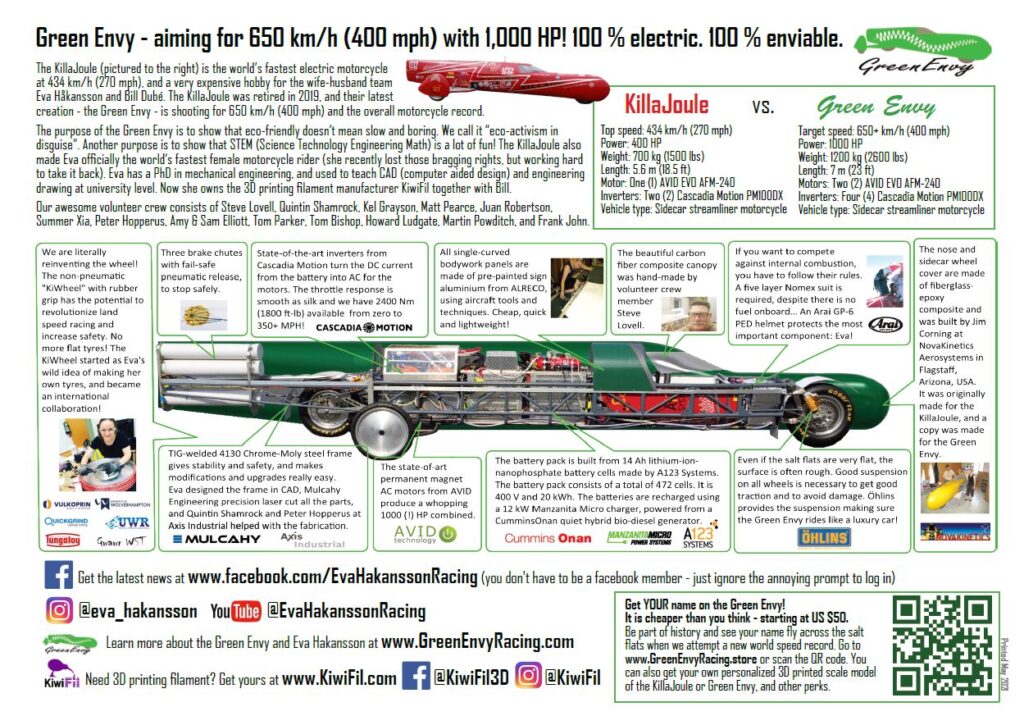 Timeline (had to be very much revised due to the virus outbreak….):

March 2020: The planned debut for Green Envy was at Lake Gairdner salt flats, South Australia, Australia under the sanctioning of the Dry Lake Racers of Australia. The goal was to make a safe, successful run and keep the rubber side down and the shiny side up. A speed of 200+ mph would be considered a success. Anything higher than that would just be bonus! Well, that was the plan. Then the pandemic hit and the world closed down.

March 2021: And the debut didn’t happen this year either.

March 2022: And neither did it happen this time!

July-September 2022: Aiming for Bonneville, USA instead. Target: 200+ mph, perhaps even 300+ mph if the planets line up and the angels are singing. (Yes, everything has to work perfectly for this to happen, that’s why it takes so long to prepare).

It is always fun to play with numbers. They call this “racing on paper”, but the reality is if a vehicle can’t set a record on paper, it definitely won’t do it in the real world either. With the current gearing and the conservative drivetrain settings for amps and torque directly copied from the KillaJoule (which means basically zero risk of breaking anything), the Green Envy stats are the following:

As you can see, electric vehicles can be both incredibly fast, and incredibly efficient! That’s why the two most important vehicles in my life are electric: my race vehicles (KillaJoule and Green Envy) and my daily driver (a 2013 Nissan Leaf). Sometime in the future, I hope to add an electric airplane to my fleet, but I certainly can’t afford that with my current expensive addiction (i.e. racing).  😀

Do you want your name on the Green Envy?

Yes, you can get your name or logo on the Green Envy. Check out your options here.